UPDATE: Now includes Rodentian: ratfolk who can thrive in nearly any environment and have a multi tool-mouth. The update (as with all updates) is free. Just download it again to get the latest version.

One Page Lore: Fantasy Folk provides the highlights for the diverse and unique people you'll meet in fantasy tabletop role playing games (TTRPGs) that makes them fun to play as characters or non-player characters (NPCs) no matter what system you use.

It also provides alternatives to and removes personality restrictions, social constraints, and problematic tropes, allowing for better, more engaging characters. Players and DMs can use these ideas as ground work or suggestions when creating characters, expanding on these ideas to the limits of their imaginations, personal taste, and setting.

Oh, and it packs it all into one page, so you can start playing sooner.

Want a sample? Take a look at the entry for ORCS, LIZARDFOLK, KOBOLDS, ENDRACOT, and MERFOLK.

I want to make sure everyone who wants a copy has one while also building a relationship with readers and players. There's always an extra copy waiting just for you. Just ask.

In order to download this game you must purchase it at or above the minimum price of $8 USD. You will get access to the following files:

There was a large text version, but updating it became troublesome and since it's digital, bigger text didn't seem like benefit for anyone since zoom should fix the issue. So I removed the large text version. If that's an issue, let me know and I'll see what I can do.

Is fine, was simply unsure what occurred.

​I absolutely love this work. All of the lore is so evocative and there’s enough depth to make it all interesting but not too much to get your hands tied up. Throw it at your players and say “pick what you like and we’ll go from there.”

One Page Lore: Fantasy Folk is a system-neutral deep dive into a number of fantasy species, focusing primarily on physical traits and their direct ramifications rather than assigning anybody a bland monoculture.

Basically, it'll tell you that fungusfolk get drunk really fast and that they only live for about a year, but it won't pidgeonhole them into "these walking boletes all believe you should adopt pigeons" or the like, thereby leaving you a bit more room to figure out where you want them to properly fit in your game world.

The PDF is 50 pages, with solid layout and a nice cover, although there's no internal illustrations. And again, it's system neutral, so you can use it to guide a DnD setting, or a Fate one, or a Ryuutama one, or whatever you've got on tap.

Probably the biggest selling point for this supplement is its creativity. There's a *lot* of cool flourishes and details you can use for RP (or worldbuilding, if you're the GM.) Mushrooms having short lives is one, but there's also stuff like dwarven aging hitting all at once and turning them to stone, and elves being cold-blooded and having mantis shrimp spectra eyes.

Probably my favorite bit is about Halflings, who sleep like cats, taking dozens of naps over the course of a day but never getting anywhere close to a continuous eight hours of unconsciousness.

It's fun and it feels fully fleshed, although it may take your setting further in the direction of weird cosmopolitan fantasy and further away from beards and studded leather armor and quests if you lean all the way in.

Overall, I'd recommend this to anyone who's putting together a fantasy campaign from scratch. Even if you use none of the details from it, it does a good job of getting you to think about the nuances of different species, which also might be useful if you're new to homebrewing races but thinking about giving that a shot.

-Page 6, lifecycle, para 3, "potent for them. come from the" fragment

Thanks for the glowing review! I'm glad you like it. And I fixed that error you mentioned. I believe it popped up when I had to do some reformatting to add the blemmyes. Thanks for that!

Basically, my final verdict for this is:

I actually used this for my projects, and I am amazed with what you have done with this.

Good job! I am looking forward to your future projects.

Shucks golly. Thank you so much for saying so! I'm glad you love it and use it that much! I'm also excited for updates and new projects, so I'm thrilled to know someone else is looking forward to them as well.

Is it possible for you to have community copies for this?

I'm new to itch, so I'll have to look into how to get that set up. But the idea of community copies seems nice. Thanks for bringing it up.

Thanks again for bringing up community copies.

So I read up on it and I like the idea, but I wanted to do it a bit differently. Rather than having copies based on sales, I have it open to anyone who asks. However, the current layout for community copies won't let me do that, so I added it manually.

Thanks for the guide. The one I found was for a now outdated interface on itch.

Any chances at a sequel?

Instead of a sequel, I will be adding more folk to the book. That way everyone who already bought it has access to the new material.

There will be a separate companion book called something like One Page Lore: Locations that will get into the culture of different places and ways that can influence a character. Separating nature (Fantasy Folk) from nurture (Locations) is a big part of the One Page Lore series.

Thank you for answering! Looking forward to more One Page Lore, both updates and new entries!

More than one page TOTAL SCAM (it's great)

SHHH! Don't let the secret out! (And thanks. I'm glad you like it!)

Love this; great for brainstorming ideas!

Super glad to hear- or technically read- that! I hope everyone at your table thinks so as well. 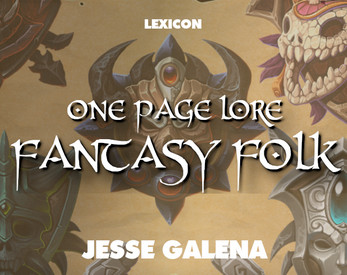 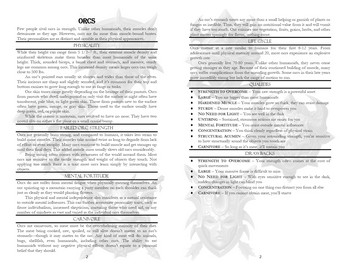