Deities can be as selfish, caring, or cryptic as any mortal we meet, though their true intentions and goals are inevitably wrapped up in a reality normal folk will never be able to fully comprehend.

However, they sometimes require more of mortals than their praise or devotion. They need their aid and may descend to our plane or send omens as a means to guide folk to help them or avoid catastrophe.

These three All Dice Tables give players and GMs a direct quest from a deity, complete with treasure and complications, a cryptic omen they must interpret, and the ability to create unique deities within a pantheon. You can use these tables individually to provide dynamic quest or interaction, or you can roll all three and let that guide you on the goal of your next campaign. You can roll the tables and give chance the reins to shape the events, or you can read the tables and it influence you. You can do whatever you want. It’s your game.

The three All Dice Tables contained:

How to use All Dice Tables:

The entrance of the deity: A thick fog rolls in. The rumble of heavy footsteps accompanied by bone-chilling cry pierces the air. A long-necked creature sticks its head and neck out; the fog obscuring the rest of its body. The deity requests the party to kill in their name, etching their symbol in chalk in front of the next 4d6 kills. If the party completes their task, the deity will use their powers to make one idea or concept a natural law (to the best of their ability). There is a slight complication… A very powerful creature will be very upset at the party if they find out they're involved. Failure means the deity will lose significant power, allowing their rivals to become far more powerful. If the party completes the deity's task, their rival will make the party minor demons (according to their scriptures). 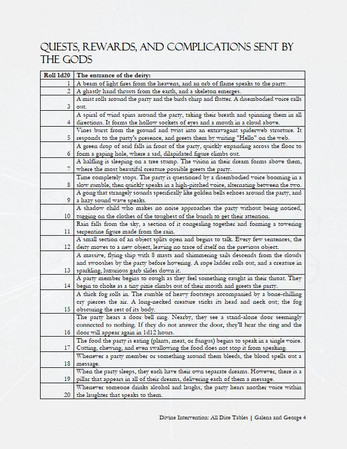 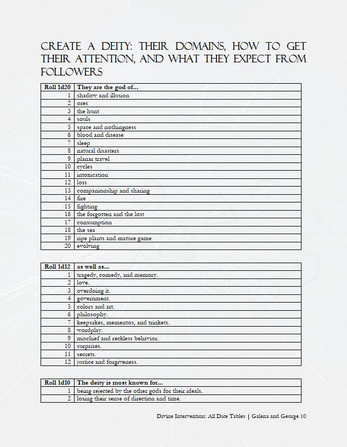