Myself and Thomas have two big problems with status effects used in combat.

However, giving someone a penalty to specific actions inspires creativity without removing their agency. Having multiple types of penalties can ratchet tension without giving a character so many penalties they’ll fail unless they critically succeed.

Solving both of those problems is what we decided to do with this book.

This allows GMs to use re-imagined classic penalties (blinded, charmed, grappled, prone, sickened, and so on) and get a whole new host of status effects (dulled nerves, divine intervention, martyr complex, prosopagnosia, time displacement, and so on).

They are divided into four categories:

The effects can stack, allowing for increasingly difficult situations

We also provided a roll table at the end if you want to roll for a random effect. You can roll the applicable table for the situation or encounter, or if you want to have any of them occur, roll 1d4 for which category you will roll, then roll the proper die for that table.

Written and designed by Jesse Galena (u/RexiconJesse), and written by Thomas George (u/DougTheDragonborn).

After One Page Lore Fantasy Folk showed Galena Quality to me, I've made a habit of checking for new Galena works. Despite what I have to say on some statuses, I mostly found the text quite nice.

To be entirely honest, not the biggest fan of Flawed Instincts, Impulsive, and Intoxicated from Behavioral, Doubting Others from Mental, and Empathetic Overbleed and Existential Dread from Other; they feel like they'd lead to... issues, let's say. Possible problems with divining what the circumstantial limitations are and are not I suppose, for lack of any better words.

For Doubting Others, I'd make it a straigh inverse of Self-Doubt; surprised it isn't already.

The Behavioral ones I've no real clue what to do.

Empathetic Overbleed, maybe just have it be a penalty until sufficient distance is made between the affected and the affectee? Any effect that depends on the "reasoning" of this or that character that isn't "A gave B a suggestion or order or similar" seems like a problem area, and Charm is already a separate effect...

Existential Dread, might be better to not go for a crisis of faith as a status effect. Maybe just a sense of hopelessness that gives blanket penalty, no conditions?

Other than the mentioned above, the status effects in the text are fairly intuitive and interesting, some fairly niche, but not uselessly so. Also easy to read, and Mental and Other have easy d12 and d10 roll tables.

I look forward to yet further Galena works in the future.

With 60 effects, we definitely wanted to include a wide range of options, with some working better for crunchier systems and others leaning further toward roleplay-focused groups. I'm glad the majority are overwhelmingly positive for you. 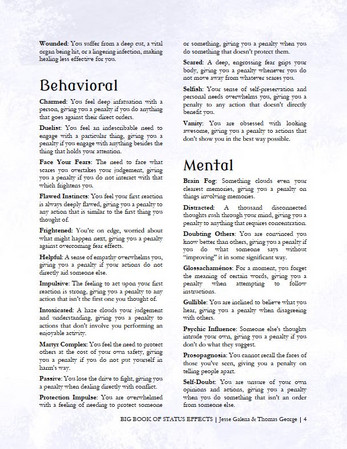 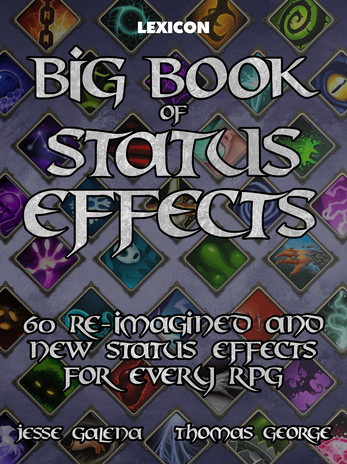